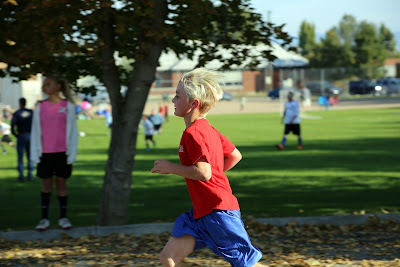 The school sports day season is with us again: a sunlit extravaganza of running, skipping, baton-exchanging, jumping and 'Good Try' stickers for children who got their legs tangled in the skipping rope just after the start line and couldn't catch up afterwards.

Then again, we could be all set for a bonanza of 'team events' where winning and losing are bad words, 'Good Try' stickers simply aren't required and the laurels of victory have been forever consigned to the "so-twentieth-century" dustbin. "Failure is not an option", say the reformers. "We must strive for equality and sweet, harmonious concord, lest the dark waves of bitterness and woe embrace the hearts of those whose misfortune it was to attain only unto last place in the annual egg and spoon race."

Smoothly put. But isn't there a better way?

I have always had a problem with such 'no-winners, no-losers' sports days. Sure, there are problems with traditional sports days too. There will always be that one kid who comes in last in every race and for whom the day is complete torture from beginning to end. Fortunately, that kid was never me but, from other personal experience, I can imagine the sheer agony of what they go through. And yet, to counteract that argument, we have to admit that winning and losing are part of life and at some point children are going to face failure and will need to learn how to deal with it. Their personal feelings can't be cherished forever. A child who has been cossetted throughout primary school is, I would suggest, going to have one mighty shock when they reach secondary school and finds out that winning and losing are suddenly accepted norms.

The other question is, does it work? 'Team events' are not necessarily an effective method of promoting equality. Kids aren't stupid and they will be well aware that even when 'working as a team' there are some members of that group who are more talented than others. When I was at primary school I was a member of both the school's football and cricket teams; an equal member, you might say - one of the boys. I wasn't that stupid. It was pretty clear, most of the time, that I was in the team mainly due to lack of players than for any more worthy reason. I was the kid who felt good about himself if he managed to hit the ball with the bat, the one who stood helplessly in defence while other, more highly-skilled classmates got on with the important business of scoring goals. Sometimes I didn't even make the starting eleven but was forced to stand shivering on the sidelines while we won game after game after game. Our school football team was one of the best in the area but I was under no illusions that our success had anything much to do with me.

This view was brutally confirmed when I started secondary school and encountered some of my former opponents. On my first or second day a stocky, blond-haired boy came over, looked me up and down and said bluntly, "You used to play for such-and-such didn't you?
I admitted my former allegiance to the jazzy blue and whites. He remained unsmiling.
"You were c***," he said.

This from a boy whose school our team had once pummelled 8-0!

As a sportsman, therefore, I was accustomed to failure and it wasn't nice. But there was one day when all this changed: the school sports day. I may not have been much good at football but on the racetrack there wasn't anyone who could beat me. It was about the only time all year when I had the undiluted support of my classmates - at least, those who were in the 'red house'. Those eighty metres represented sun-drenched payback for all the wet and windy hours spent shivering on a football pitch or standing hopefully in a line at lunch time waiting my turn to be picked. And this is my point: without that shot of old-fashioned 'competitive' sport I would never have got that payback. That, and the even bigger event when we raced against other local schools, were some of the highlights of my year.

There will be children who don't have that payback though. There will be children for whom sport as a whole, team sports or individual ones, represent unpleasantness bordering on torment. So surely the best type of sports day is not one where competition is everything, nor one where competition is completely banished, but one where every child has the chance to do something they enjoy and feel they can succeed at? With the wide range of activities available and the ingenuity of the modern school surely such things should be possible, at least to an extent, if only to provide some success and eliminate failure wherever possible.

What we shouldn't do is remove individual competition completely. Not only because children need to understand that winning and losing are part of life and aren't necessarily the sole yardstick for personal self-respect but also because somewhere there may be another little boy, with spindly legs and hands all thumbs who can't kick a football or stack cups but who knows that, given eighty metres of track and an equal start, he can enjoy his day in the sun as much as anybody else.